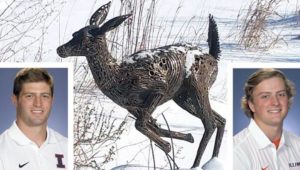 James Marchese, 21, and Drew Murtaugh, 20 admitted they relocated a steel sculpture from a Champaign park to their rooftop have been charged with theft.

Both appeared Friday in Champaign County Circuit Court after having earlier been given notices to appear.

Each man was charged with a single count of theft between $500 and $10,000 for allegedly stealing a deer sculpture titled “Startled” from Scott Park in the 200 block of East Springfield Avenue on April 29.

If convicted, they face penalties ranging from probation to two to five years in prison.