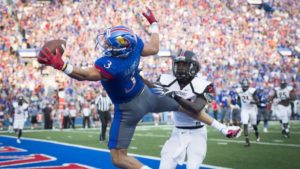 Kansas Jayhawks football receiver Chase Harrell was arrested early Sunday morning by Lawrence police on suspicion of driving under the influence, according to logs from the Douglas County Sheriff’s Department.

Harrell, who was fifth with 221 receiving yards and second with three receiving touchdowns for the Jayhawks last season, was released on bond, the log stated. He is scheduled to appear in Lawrence Municipal Court on March 28, according to the court, and had a previous municipal court warrant for failure to appear on a no insurance/no valid driver’s license charge issued Oct. 29.

When contacted by The Star, the KU football program said it was “aware of the situation. We are currently still collecting all the details. When that process is completed, we will have further comment.”

Source: KU receiver arrested on suspicion of DUI in Lawrence