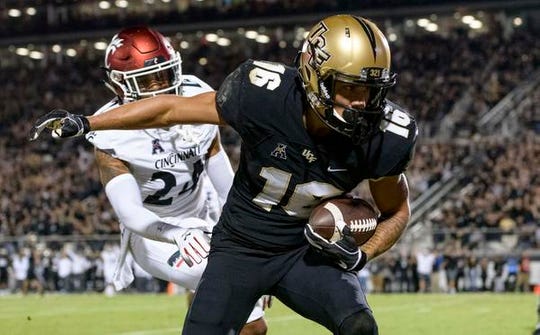 Cincinnati Bearcats’ football player Noah Hamlin was arrested Saturday on his birthday in Pittsburgh, according to a police criminal complaint document obtained by The Enquirer.

The redshirt sophomore defensive back was charged with felony fleeing or attempting to elude a police officer, misdemeanor driving under the influence and summary offenses including underage drinking, carrying a false identification card and failure to obey traffic control devices.

“We are aware of the alleged incident involving Noah Hamlin and are gathering the appropriate facts,” said a UC spokesperson in a statement. “The student-athlete involved has been suspended indefinitely from all team activities per UC Department of Athletics policy.”

According to the police document, Hamlin, 20, agreed to give officers two alcohol concentration breath samples. The lower of the two samples was .148. In Pennsylvania, anyone under the age of 21 can be found guilty of driving under the influence if their blood alcohol content tests at .02 percent.

Police said they initiated a traffic stop after they observed a vehicle driven by Hamlin stopped in the middle of the road and later run a red light. When police activated emergency equipment, Hamlin stopped at an intersection but drove away when officers stepped out of their vehicle. When Hamlin stopped again, police approached on foot and ordered him out of the vehicle. Police say Hamlin did not comply and reached his hand under the driver seat.

“At this time, I opened the driver’s side door and grabbed the male by his arm pulling him out of the vehicle and detaining him with handcuffs,” the arresting officer wrote.

A female passenger in the car was “extremely intoxicated,” began vomiting and was later transferred by medics to a hospital, according to the report.